The Una River was named by old Romans who, upon the first sight of its lively beauty and the sound of its cascades, sighed UNA, meaning “one” or “the only”. The total river course is around 212.5 kilometres long. Its spring is near Donja Suvaja and Donji Lapac, below the slopes of Plješevica and Stražbenica mountains in Croatian region Lika. It drains into the Sava River near Jasenovac annually bringing about 8bn cubic meters of water. 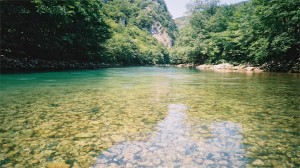 Its spring is at the altitude of around 450 metres. The spring irresistible resembles a miniature turquoise lake surrounded by large limestone rocks. It is protected as a geographical and geological natural monument. Extremely cold spring water gushes with enormous power from underground, creating huge whirls, and the first cascade can be found as near as twenty metres away. Several smaller confluents also contribute to the substantial water volume, some of which are Studeni Potok, Srebrenica, Sredica and Lalinovac. The Una River course flows through the following cities: Martinbrod, Kulen Vakuf, Ripac, Bihać, Bosanska Krupa, Bosanska Otoka, Novi Grad, Kostajnica and Kozarska Dubica.  The Una River drains into the Sava River near Jasenovac. Larger confluents are the Srebrenica, the Unac, the Krušnica, the Mlječanica, the Moštanica, and the Sana as right tributaries, and the Klokot and the Žirovac as left tributaries. It is important to mention that numerous underground waters and smaller karst springs also drain into the Una River course from its spring to Bihać. The water basin located between the basins of the rivers Kupa and the Sava in the North, the Krka and the Zrmanja in the South, the Korana in the North-West, the Vrbas in the East and the Sava in the North-East, also belongs to the Una River. The Una basin has a moderate continental mountain climate with some 9.5 C or approximately 12.5 bn of annual rainfall. During dry summer months the Una River is characterised by a low water level, while the water level from November till the end of spring is rather high, causing frequent overflows.

From its initial course, where it is classified as a mountain river, all up to Martinbrod, the Una has the first category of water quality. Up to Bihač, the Una flows in Dinaric direction, i.e. SE – SW. Later on the river course turns to NE direction and continues to flow through deeply cut-in, wide and vast valley where it has a different water quality. 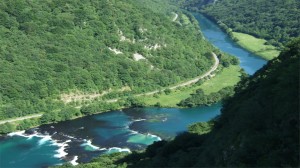 The first large cascade is located in Martinbrod, a place situated on the foot of the canyon where the river Unac drains into the Una. This is the most breath-taking place since the tuff has created numerous canals, rapids and small islands, as well as several larger cascades from which the biggest roughly amounts to 55 metres. These natural cascades have for years presented a unique treasure, drawing a substantial number of not only natural beauty enthusiasts, but also fishermen and artists who seek inspiration for their works of art in the Una.

Large cascade Štrbački Buk is especially distinctive. It is located in the immediate vicinity of the Croatian and Bosnian border. Štrbački Buk in fact comprises several cascades in near vicinity. The largest cascade, about 25 m high, is a sight which can be enjoyed for a very long time. The river gushes down the rocky surface with high speed thanks to enormous water flow strength thus creating beautiful white wall which is most certainly breath-taking to every observer. 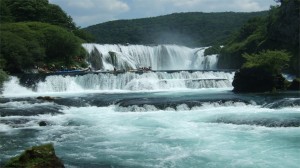 Because of its nearly intact nature, this magnificent part of the river has attracted rafters who attend the region every year, enjoying the Una River beauties and its restless waters which create both awe and admiration.

According to local fishing associations, there are 28 different fish species living in the Una River which can have as many as 30 kilos. Nearly two hundred different herbs grow along the river. A rare plant called “Unska zvončica” (Unensis Campania) was named after the Una River.